An annoying rain threatened to derail my mood on the morning’s run as I made way through a tiny village in the east of Ireland called Roundwood (an Tóchar) in County Wicklow. My sister, Laura, was due to be married in the Irish countryside that day, which happened to be my birthday. Following a road known as R755 to another called R765 I found myself crossing the Vartry Reservoir and ended up somewhat lost in the meadows and narrow pathways as the sky continued to mist.

It was August and I missed a crucial part of my preseason for the upcoming college season and I knew there would be hell to pay once I got back Stateside as my position would be occupied. As I ran through the Irish countryside I saw an old man out for a walk with his dog. He was well into what looked to be his sixties or seventies and this man carried a rather large rock his arms. The dog approached me as did the man. Admittedly, I stopped for two reasons. The main reason I stopped was because I was lost.  But I was also curious as to why he was carrying this giant stone.

“Good morning, sir. Can you tell me how to get back to Togher Páirc in Roundwood?” The dog, a border collie, licked my hand and rammed his head into my legs as its tail wagged.

“It’s that way, just a few kilometers,” he said.

I looked at the rock and could tell he was struggling with its weight. “Can I carry that stone for you, sir?”

“Don’t be daft. I’m carrying it just up the road to the wall.”

“The wall?” I asked as he started walking again as I waited for clarification.

“Well, come on Finny.” The dog trotted off to catch up with his master as I looked up, squinting in the rain. “You too, son. Come along,” the man said. I jogged up to him and began walking as the dog resumed its attention-seeking routine of licking and nipping at my shoelaces.

“He’s used to herding sheep. He’ll keep you moving, the little bugger. My name’s Brian. Yours?”

“American, are ya? Well, welcome to Éire — sorry about the weather.”

As we walked Brian adjusted the rock several times but never released his grip on the object pressed against his chest. I kept looking for this aforementioned wall, but saw nothing. As we made our way down the road we talked about the weather, as strangers are apt to do. We also talked about football, mainly his favorite team, Shelbourne Football Club. The wind picked up, turning the fields into an ocean of green with a rolling tide. I finally had to ask the question.

“So where’s the wall?” I asked as we continued walking. Brian kept walking until we reached a small clearing.

“Here,” he said. “The wall is here. I’m making the wall. Each day I bring a rock from the quarry or from my field and walk it here. It keeps me young. Keeps me fit and active. And you know, son, walls don’t build themselves. They’re just like anything else.” 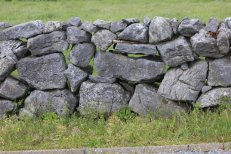 “Think about football — you ain’t out here enjoying the country for no reason. You’re putting a bit a work in. I can will the wall to build itself and those stones will stay put. But each day, I add a rock. Soon, I’ll have a proper wall. And when it’s built I know I have kept to my task, you know, stayed the course. Consistency, son. That’s the difference between good and great in anything. Each little wall I built with Finny here is a little symbol that I’m out for more than a walk. I used to walk with my wife. Well, my wife’s gone now, so it’s just me and this dog here. My kids are grown and live around Dublin. So I see no reason to keep myself fit and sharpish.”

With that, he placed the rock next to a collection of carefully arranged rocks and looked off in the distance and took a deep breath. We sat down on the “wall” and talked about his favorite Irish players like Ronnie Whelan, Frank Stapleton, and Johnny Giles while he packed his briar pipe and puffed away. Off to the west, I saw St. Laurence O’Toole Church, which meant I was near where I needed to be. After finishing the pipe, he tapped it lightly on a stone and stood up. Brian shook my hand, thanked me for the company and began his walk back to where ever it was he called home with his furry companion.

So, what’s this all have to do with soccer? For me, it has everything to do with an individual’s journey. A true footballer, someone who loves the game for what it is, not what it could or should be in their mind, understands that every single day presents them with the opportunity to improve. For example, aside from soccer, my other passion is running. Ever since that chance meeting with Brian, I have this little routine when I go running that keeps me consistent and disciplined. I start out my run with one task — find a small rock. Once I find it, I’ll run through the trails and country roads until I reach my turnaround point.

At that point is a pile of rocks. Each time, I add one more to the collection. Simple.

Progress doesn’t just happen. At the risk of sounding cliche, I firmly believe players and coaches over-complicate the game. There is nothing profound in how someone goes from good to great. In fact, I really believe when Brian said, “Consistency, son. That’s the difference between good and great in anything,” he was right.

I can’t count how many players who start a training program I create for them and lack the willpower, energy, motivation, or spine to finish it. In fact, I’ve grown rather skeptical of those who say they want to get better but never see anything to completion. Look, I never “made it” as a player and I am certainly not an authority on what works and what does not. Whether or not players listen to their “academy” coaches or dads over me doesn’t affect me. A former player of mine was discouraged by his academy coach to get supplemental work in because it would “take away from the serious game with the academy”. I’ve got no problem with that. I refuse to charge players for my coaching because I don’t believe in making it about money.

Most of the lessons I learned…I learned them too late. Most of the chances I had, I spurned or was too busy battling back from a broken neck to fully see through. Most of the bridges I burned or were burned for me are still in a heaping pile carnage in whatever river of chaos they once extended over. That’s life. That’s soccer. Nobody cares about your failures. Why should they when they have their own to wrestle with each day? And believe me, most people have to worry about things much more important than the game.

Recently, someone asked me why I still care and play the game. It’s a great question and for a long time, I couldn’t find an answer. The real reason is in life things get taken from you. Jobs, scholarships, people, freedoms and rights, opportunities, the list goes on and on. And as someone who at 17, was told his best shot at a “normal life” was being surgically turned into a quadriplegic, every Sunday league game, kick-about with my nephews, time spent kicking a ball against a wall alone feels like the final of some cup competition. The results don’t matter nearly as much as they used to; however, the time spent doing something I love means everything.