[North] American soccer is an anomaly in the most peculiar ways. For a country that has yet to produce a single world class player, it sure expects to produce world class soccer. Why? Americans, especially those involved or invested in soccer, are guilty of coveting the result without respecting the process.

Of course, I responded by pointing out how far off the United States is from producing players half as talented as Leo Messi on his worst day. Unsurprisingly, I caught a lot of flack for challenging that video released by Major League Soccer and disturbing the murky waters of U.S. Soccer. The mainstream soccer media protects bad players and coaches, hides major flaws in the system, and has the audacity to parade around as an ad hoc PR and marketing arm for MLS and U.S.S.F. with alarming regularity. Every now and then, a great article makes its way through the muck and the mire. The problem is, I am a product of U.S. Soccer as are many who question it.

But back to this being “guilty of coveting the result without respecting the process” line. Think about what that means. The pretenders of [North] American soccer want players with the creativity and vision of the world’s best players yet won’t acknowledge the gaps of the U.S. Soccer system. This same group defending the status quo has excuses at the ready when things go pear-shaped, but has a hard time raising the standard for player development.

If only this was a USSDA problem, the solution would be at the ready. This is a grassroots problem. On January 11, 2015 I tweeted: “The problem w/ US Soccer is it aims to enact change at the wrong end of playing spectrum. Fix grassroots game you’ll have better NT players.” After 47 Retweets and plenty of great conversation on the topic of player development I took the backseat and let people continue the dialogue.

The solutions to the issues mainly revolved around:

All of these are valid. However, I contend the issue goes further. Over-coaching and pseudo-coaching. There are entirely too many idiots at the helm of the American and Canadian game. Many live-tweeted from the NSCAA Convention and did one of two things. On the one hand, they shared valuable information and giving feedback to those who could not attend. On the other hand, many (not all and certainly not anyone I follow on Twitter) took a breakout session or a lecture from a coach at a prestigious club and coveted the result without respecting the process. On example I use is the rondo. American coaches are guilty of expecting players to do this when they can’t pass and receive the ball consistently.

The United States is not a nation of patient people (I can’t speak for my Canadian friends). It’s unfashionable and “un-American” to respect and study what other countries do with their football programs from the ground up. I admit that I believe in building from the ground up. I believe in building a strong foundation of independent clubs producing high-level players that are appropriately compensated should a player be identified and selected by a professional team. No league should control or speak for an entire federation. I don’t believe in stepping on the necks of the poor so only the wealthy and affluent can play. The players who can best serve the country are the players the country under-serves most. I don’t know what America and Canada are afraid of. The minute these two great nations want to be a great at soccer, they will be hard to stop.

Closer to home, I believe in players getting their asses off the couch and getting to a wall and learning how to pass, receive, and turn with the ball for hours and hours. So maybe, just maybe they can play at a higher level and tempo. I believe in black boots. I believe in a return to the basics and the mastering of the fundamentals. Where have the players gone who took pride in carrying the piano? How many players watch a game with a studious eye — observing the play off the ball, studying how others play their position, thinking steps ahead of what’s on the screen? Sorry, kids, but if you get all your tactical “analysis” from Twitter, FIFA video games, or your buzzword-drooling “elite” coach, you are being duped. Read every book you can find on the history, philosophies, and narratives of the game. Find a team that isn’t one of the giants of European football and decide to follow them for a year. Learn how a club really operates. Learn the difference between a true football academy and the academies here.

Since when does every kid on an Academy team “deserve” a full scholarship, a professional contract, or any shortcut in a game that owes us nothing? I don’t believe in the kitchen table coaching session when it aims to hurt others. I don’t believe the typical American player is tough enough to truly be great.

Many view an established game as real competition. Some of the best competition I had as a player was derived from hours playing informal cage soccer under the floodlights. The best competition I had was generally against myself. It was either me versus the player I used to be, or me versus the player I wanted to become. Embracing challenge is a survival skill. I love talking to players I’ve coached and am saddened when they tell me they quit the game or that “soccer is too hard”. 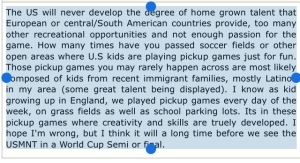 Playing at a high level isn’t for everyone and requires a degree of sacrifice most are not willing to pay. I spoke to a former player who told me the only reason he quit playing was because “soccer was too hard”. I’m sure there are things going on that are valid reasons he quit, but he asked me to re-tell a story about a friend I had growing up.

The brief story about a guy I grew up playing soccer with named Danny Haywood. Danny and I went to the same elementary school in San Jose, California. Danny’s father was from Nigeria and his mother was from the U.S.. Danny lived on the other side of the tracks and came from a shattered home. I was luckier and more fortunate. Danny and I played on many teams together and both were really good for our age. We walked home from school until we came to a fork in the road. I’d walk north to a nicer neighborhood. Danny walked west, under a graffiti-soaked bridge to a rougher side of town. At school, Danny was made fun of for having an African father and a white mother. There was seldom a time where I didn’t see him crying, yelling, fighting, or playing soccer. Danny carried his books and soccer uniform in a plastic bag which, at times, he’d tie up and throw in a nearby stream to avoid being mugged. Later on, we’d retrieve the bag down stream where the garbage collected.

Every week, my father would pick up Danny for soccer practice. One day, Danny didn’t come out when we pulled up. I went to the door. There was an eviction notice on it. He stopped coming to my school and had been reassigned to the “city” school. His father worked as a valet driver at a hotel and a dishwasher at a restaurant. His mother worked as a seamstress. They were good people with not a penny to their name. But after a few weeks of no-shows, Danny suddenly returned to practice. He refused to participate in a “shirts and skins” game because he had cigar burns, bruises, and welts on his body — the toll he paid for being a new kid in a bad neighborhood. He refused to tell us or the coach where he lived because he didn’t want anyone to come looking for him or to see the conditions he lived in. He sprinted to practice to avoid being approached by bullies and gangs. He played his ass off and continued to play soccer because it took him away from the hell he lived in. Danny was punched in the face and beaten with a belt by a farmer who caught him picking apples in his orchard. When the farmer asked Danny why he was stealing apples, Danny said it was because he was hungry. I gave him clothes and shoes to wear. My mother took him shopping for school supplies. Danny cried out of embarrassment.

Christmas came and Danny asked for one thing. A soccer ball. We bought him a soccer ball and he played every day. He dreamed of playing for AC Milan because of George Weah. Danny’s life was hard. Sometimes young players don’t realize how hard life can really be. I sure didn’t when I was young. Danny once told me, “I never knew how hungry I was until I had to steal apples off trees.”

Take from the anecdote what you will. I believe the American and Canadian game is full of Danny’s who are too silenced, priced out, ignored, and under-served. I believe that somewhere in these great countries are players who haven’t had the creativity coached out of them, who would be happy to be role players, who don’t feel entitled to anything, and who will find a way to beat their circumstance to play the game they love.

Just don’t expect anyone up top to lend a helping hand.